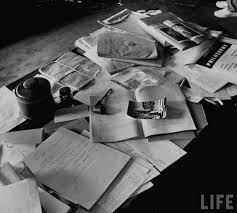 TMZ, August 31st 2010: Check out the exclusive pictures of Christian Grey‘s romantic Hawaiian getaway with Anastasia Steele last weekend. The pair spent a week in a private beach rental priced at over $13,000 a night!

I stare down at the screen of my laptop and at the pictures that were taken from Katherine Kavanagh’s and Mia Grey’s social media accounts and plastered all over the internet for the world to see. The first picture is of Anastasia and Mr. Grey sitting at a table together, half of Mia’s face in the frame, and what looks like a Hawaiian feast laid out on the table before them. It’s fairly dark in the picture, and their faces are only illuminated by the torches set around the table, but they’re both smiling broadly at the camera. Clearly genuinely happy.

I scowl at the screen and then click the arrow for the next picture, this time of Anastasia sneaking up behind Mr. Grey, who is sleeping on a lounger next to the pool, with a bucket in her hands while she smiles mischievously at whoever is taking the picture. Next, Anastasia and Mr. Grey are in the ocean together, waist deep in the water, and his arms are wrapped tightly around her. There is a fan of water droplets sparkling in the air around them as Mr. Grey spins her around in the water and she throws her head back in laughter. I focus in on his face, and the look of pure, uninhibited love that he gives her as she loses herself in the joy of the moment makes me want to break something. I jab my finger down on the touchpad of my laptop to move to the last photo, a picture of Mr. Grey and Anastasia walking down the beach, hand in hand, at sunset. Her long dark hair contrasts perfectly against her full length flowy white dress, both of which are blowing gracefully in the wind as they walk. If it weren’t for the fact that Mr. Grey was wearing a pair of dark navy swim trunks and a heathered gray t-shirt, it would look like a wedding photo.

That’s going to come next. I think bitterly to myself, and I close the lid of my laptop.

The apartment around me is small and messy, and I have to share it with two roommates even though there is barely enough space for one. It’s nothing like the giant penthouse apartment Mr. Grey takes Anastasia home to every night. There are no vacations planned for my near future, no fancy cars for me to drive to the publishing house my adoring boyfriend bought for me just so I could be around him for a stupid, pointless internship that didn’t even pay anything. There are no gargantuan diamond rings waiting for me, no ridiculously expensive and elaborate white gowns with cathedral long trains, no aisles to walk down, no handsome billionaires to proudly proclaim, I do. There will be no picket fences, or gray eyed children, or a pair of rocking chairs on a front porch somewhere, groaning slightly as they sway back and forth while Mr. Grey holds tightly to my now wrinkly hand, playing absentmindedly with the wedding band he put there decades before.

I’d pictured these things in my mind over and over again, every night. Obsessed about them, spent countless hours trying to figure out how to make them a reality. But it will never be reality, never my reality. This is the future for Anastasia Steele.

I can’t even think her name without contempt any more. The hatred I feel for her, for the both of them, as they flaunt their perfect lives and their complete devotion to one another has completely consumed me. I’ve done everything I could think to do to take that from them, but the first time, I was rash, angry, and stupid. I acted too quickly and they ruined my plan before it even got started. I’d felt the sting of that loss especially hard, but still, the second time has been a much more difficult pill to swallow.

Elena Lincoln may be a legitimate psychopath, but I’d never been more confident that someone could take Grey and Anastasia down than her. She was smart. She’d planned everything to the last detail and she had everything she needed right in her hands. I’d thought for sure when she called me and asked me to testify, it was going to be the end of Mr. Grey. Anastasia would receive no guilty verdict, and that was a shame, but the pain she would feel in losing him would be vindication enough for me. I still remember the fleeting sense of joy I felt at the idea whenever I pictured them taking him from the courtroom in handcuffs and Anastasia bursting into tears of heartbreak and misery. But that was taken from me too.

I stare down at the outdated copy of the Seattle Times I still have sitting on my desk, proclaiming Mr. Grey innocent of what I’d accused him of and telling the world I’m a liar, their proof in the picture of the text messages I’d stupidly sent to Andrea displayed across the front page. I swallow hard as the bitter taste of my hatred creeps into my mouth, my mind racing for another move, another way I can end the abomination that is their happiness, when my attention is caught by the gentle buzz of my phone on the desk.

I purse my lips together, unsure of whether or not I want to answer the unknown number, but eventually, I pick it up.

“Who is this?” I ask, my attention suddenly piqued.

“Good. Then let’s get started.”

Book 3: A Stronger Shade of Fifty

My Tweets
Join 1,690 other subscribers